Before the end of March 1770 a grand jury had indicted Captain Preston, his eight soldiers and two customs officials accused of having fired from the Custom House. The trials did not start immediately. Thomas Gage, the  commander of the British army in America, urged governor Hutchinson to procrastinate until tensions had calmed down.

Adams sought to have separate trials for Preston and the soldiers. Since he was not accused of killing the defense would prove that he did not command his soldiers to shoot. In the trial of the soldiers Adams sought to prove that they were following orders from his superior. There was a clear conflict of interest in defending both parties but the magistrate agreed to separate trials.

On the third anniversary of the Boston Massacre John Adams wrote:

“The Part I took in Defence of Cptn. Preston and the Soldiers, procured me Anxiety, and Obloquy enough. It was, however, one of the most gallant, generous, manly and disinterested Actions of my whole Life, and one of the best Pieces of Service I ever rendered my Country. Judgment of Death against those Soldiers would have been as foul a Stain upon this Country as the Executions of the Quakers or Witches, anciently. As the Evidence was, the Verdict of the Jury was exactly right.

“This however is no Reason why the Town should not call the Action of that Night a Massacre, nor is it any Argument in favour of the Governor or Minister, who caused them to be sent here. But it is the strongest Proofs of the Danger of Standing Armies.”[1] 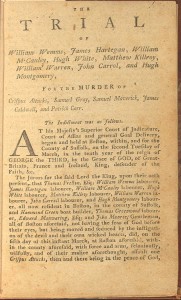 The Trial of the eight British soldiers. Click on the image to enlarge.

The defense team for the trial of Captain Preston and of the eight solders was headed by John Adams. The following were the members of his team:

Josiah Quincy Jr. was the younger brother of the counsel for the prosecution, Samuel Quincy. Quincy Jr. was the spokesman and co founder of opposition group The Sons of Liberty. He wrote a series of articles in the Boston Gazette and Country Journal opposing the Stamp Act and other colonial policies.

Sampson Salter Blowers had one of the largest trial law practices in Boston; by 1770 his income from law practice was £400, a large amount at the time. Blowers studied law under Thomas Hutchinson, a loyalist governor of Massachusetts.

Robert Auchmuty Jr. was an eminent lawyer appointed as Vice Admiralty Judge in 1767. He agreed to serve in the defense team on the condition that John Adams be the co-counsel.

Samuel Quincy was the head of the prosecution team. He was a prominent lawyer in Boston and was appointed Solicitor General of Massachusetts succeeding Jonathan Seawall. His father and younger brother, Josiah Quincy Jr., were separatists but Samuel Quincy remained a Loyalist all his life. He left Massachusetts in 1776 becoming a comptroller of customs in Antigua. He died in exile.

Robert Treat Paine was a well known Massachusetts lawyer and politician who served in the Massachusetts General Court, Provincial Congress and represented Massachusetts in the Continental Congress. He was one of the signers of the Declaration of Independence.

The Trial of Captain Thomas Preston

Captain Preston was held in jail for seven months since the night of March 5th, 1770. He was tried for the murder of five civilians; his trial took place in the Queen Street Courthouse. The trial lasted one week, from October 24th to the 30th and the main contention was whether or not Preston had given order to fire on the night of the massacre.

The prosecution team presented fifteen witnesses who stated that Preston had given orders to fire. However on cross examination their testimony appeared contradictory and weak. The defense was supported by twenty three witnesses who described the scene as a total chaos with soldiers being intimidated and abused by the mob.

Out of the twelve jurors, five were strong loyalist merchants and only two were from Boston. By law Captain Preston was not allowed to take the stand. On the fifth day, October 30, 1770, the jury, after three hours of deliberation, returned to court with a verdict: Preston was found not guilty.

The trial of the British soldiers

The trial for the eight British soldiers started on Saturday November 27th, 1770. The prisoners were brought to court in front of a panel of 12 jurors. The jurors faced the responsibility to decide whether the soldiers had fired in self defense, whether any homicide was committed, by whom it was committed or if there is any evidence of manslaughter.

The prosecution team opened its cause with the following words by Samuel Quincy:

THE prisoners at the bar, are that party of soldiers belonging to his Majesty’s 29th regiment, who in the evening of the 5th of March last, were induced from some cause or other to fire on the inhabitants of this town, in King-Street. They are charged in five distinct indictments, with the willful premeditated murder of five different persons mentioned in the respective bills; to each of these indictments they have severally pleaded, «not guilty”; and by that plea have thrown upon the crown the burthenof proving the fact alleged against them : It is my province therefore to give you evidence in support of this charge, and yours, gentlemen of the Jury, to determine whether they are guilty, or not.

Samuel Quincy and Robert Treat Paine built their case on the hatred Bostonians felt toward British soldiers. Witnesses testified on their unruly, criminal behavior and clashes with civilians before and during the massacre. However the prosecution’s case was weak. The first witness acknowledged that he had not been at King Street the night of the massacre and others admitted that the crowd was urging the soldiers to fire and some were hitting the soldiers with several objects.

The defense team opened with a speech by Josiah Quincy Jr.:

Permit me, gentlemen, to remind you of the importance of this trial, as it relates to the prisoners. It is for their lives! If we consider the number of persons now on trial, joined with many other circumstances which might be mentioned, it is by far the most important this country ever saw”… An opinion has been entertained by many among us, that the life of a soldier was of very little value; of much less value than others of the community. The law gentlemen, knows no such distinction the life of a soldier is viewed by the equal eye of the law, as estimable as the life of any other citizen.

The defense supported the theory that the soldiers fired in self defense. The defense was very well prepared, they presented over forty witnesses who described local citizens as an out of control gang and hooligans, who were throwing objects and verbally abusing soldiers, provoking them to shoot. They argued that the British troop fired in self defense, they would have risked injury if they had not.

It took three hours for the jury to deliberate before they came to a verdict. The jury acquitted six of the soldiers on all charges; William Wemms, William M’Cauley, Hugh White, William Warren, John Carrol and James Hartegan were found not guilty. The two soldiers proven to have fired without order were Hugh Montgomery and Matthew Killroy who were found not guilty of murder but guilty of manslaughter therefore escaping the death penalty. The two men invoked the “benefit of the clergy”, a plea that modified the punishment from incarceration to the branding of their thumbs.

The result of the trial was a great judicial victory for future president John Adams. He closed the defense with a masterful speech to the jury. To read John Adams’ summation to the jury click here.

Next – How did Crispus Attucks die?