To commemorate the 275th anniversary of Crispus Attucks’ birth and to honor African American Revolutionaries, the US Mint issued a Black Revolutionary Silver Dollar. The Silver Dollar was issued on February 13, 1998.

Crispus Attucks was the first patriot to die when he was killed by a British soldier during the Boston Massacre in 1770. The soldiers were defended by John Adams in the famous Boston Massacre Trial.

A surcharge of $10 on each coin was used to establish a fund for the construction of the proposed Black Revolutionary War Patriots Memorial in Washington DC. 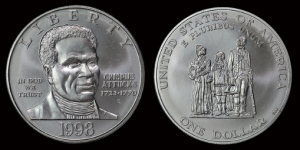