Well before the tea trade between Britain and the colonies spurred the famous Boston Tea Party, the transatlantic slave trade was the biggest enrichment opportunity for both European and colonial slave owners. Most slaves coming to the Americas in the 16th to the 19th centuries came from Africa. European slave traders bought slaves from African lords and transported them across the Atlantic to America where they were auctioned to the best bidders; they were commercialized as a commodity. The labor of African slaves was used mainly in the growing of agricultural crops in the West Indies and the American colonies, specially in the south. The transportation of slaves from Africa to the West Indies was known as the Middle Passage and was the longest part of the triangular route. Slaves were transported in slave ships in inhuman condition with a mortality rate of about 12%. 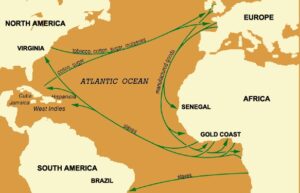 The transatlantic slave trade as part of the triangular trade.

In the majority of the cases the transatlantic slave trade was part of the triangular trade that took place during the colonial period. It is called triangular because of a specific pattern in which goods were transported and exchanged. The rationale was to sell goods in demand overseas and use the profit to purchase goods not available locally.

The typical flow of goods transported and exchanged as part of the triangular trade was as follows:

Europe: Portugal, Britain, France and Holland were the main traders of slaves with colonies in Africa. They would send shipments of clothing, guns, ammunition, furniture, among other products and sell them or barter them for slaves.

Africa: Goods shipped from Europe and much needed in Africa were traded for gold and slaves to work in plantations in the West Indies or in the American colonies.

West Indies and America: Shipments of slaves coming from Africa were traded for products not available or too expensive to manufacture in Europe. Commodities usually included sugar, tobacco, molasses and rum.

The New England colonies actively participated in the triangular trade which became an important factor in the industrialization of area. With the proceeds generated from the trade of rum New England colonies invested into textile manufacturing and ship building adding value to its exports to Europe.

The trade of slaves was not always part of the triangular trade in New England; in addition it did not include England as one of the destinations in its trade. As part of its mercantilist economic policy England imposed trade duties on its American colonies such as the Navigation Acts, Molasses Act, Sugar Act and Tea Act. American businessmen soon found that by smuggling goods they could get around customs duties and increase their profits. Famous American smugglers were William Denny, Elias Hasket Derby, Thomas Hancock who left his business to his nephew John Hancock, William Molineux and John Rowe.

Next – Notable African American slaves during the colony >>