Trending
You are at:Home»Life in Slavery»Where is Crispus Attucks buried? 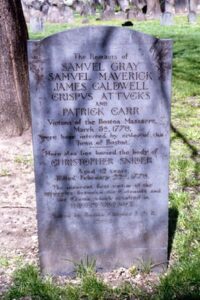 Headstone of the victims of the Boston Massacre at the Granary Burial Ground. Click image to enlarge.

Crispus Attucks is buried in the Granary Burial Ground in Boston, Massachusetts.  All five victims of the Boston Massacre, Crispus Attucks, Samuel Gray, Samuel Maverick, James Caldwell and Patrick Carr are buried together. The body of Christopher Snider, a 12 year old, who was murdered two weeks earlier, is also buried in the same grave. They share one headstone.

History of the Granary Burial Ground

Many notable citizens are buried in the Granary. Declaration of Independence signers John Hancock, Robert Treat Paine and Samuel Adams and patriots Paul Revere and James Otis. The parents of Benjamin Franklin and important politicians, literary authors and artists rest in this cemetery.

It is believed that more than 5,000 bodies are buried at the Granary. There are 2,300 headstones, most families have one headstone.

Next – Places named after Crispus Attucks >>