Prince Yonger, Crispus’ father was captured in Africa and brought as a slave to the north colony of Massachusetts where he was sold to Framingham landowner Colonel Buckminster. The first migration of black men and women from Africa arrived in North America in the sixteenth century, a forced migration known as the transatlantic slave trade. Prince was captured in the African interior and traveled for months to reach the coast, in most cases forty percent of slaves died upon arrival to the coast. He then faced the dreadful transatlantic crossing. It took months to cross the Atlantic, men and women were packed in hulls and were brandished with hot irons. 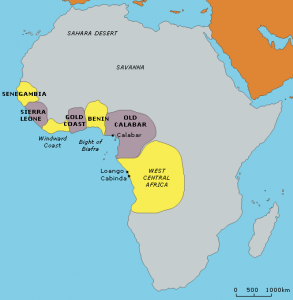 African regions where most of the Transatlantic slave trade originated in the 17th and 18th centuries.

Nancy, Crispus’ mother was a Native Indian from Wampanoag origin. Indians were not traded as slaves but Crispus’ mother was forced into slavery at the end of the First Indian War. Many towns in Massachusetts were converted to Christianity; schools were set up to speed conversion. Towns were self governed by Indian chiefs but were subject to English Puritan principles while keeping parts of their culture. The colonial government encouraged this kind of settlements around Boston as a self-protective plan to keep invaders away. 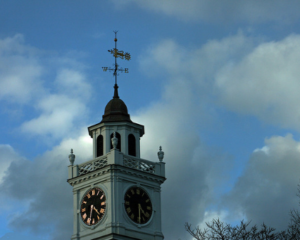 Eliot Church was the earliest Congregational Church in Natick and was founded in 1651 by John Eliot who served the Natick Praying Indians.

In 1675 Wampanoag Indians were sent to fight in King Philip’s War as allies of the British. The war is also known as the First Indian War or Metacom’s Rebellion. This was an armed conflict between English colonist and their Native American allies and Native Americans of New England. By the time the war was over in 1678, almost 40% of the Wampanoag who fought in the war were killed or dying of decease and those who returned found their homes destroyed. Their land was slowly sold and most of those who remained fell into slavery to white settlers. Later Nancy was sold to Colonel Buckminster from Framingham, Massachusetts where he met Prince. It is believed that together they had three children; one of them was Crispus Attucks.

Next – Documenting the life of Crispus Attucks >>